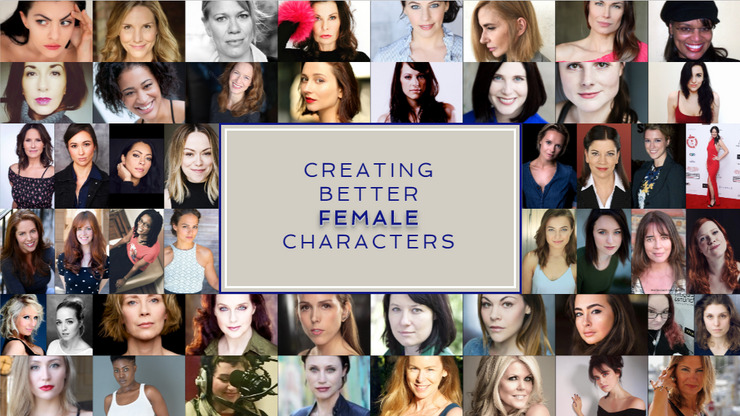 Screenwriter Phil Clarke is on a mission to help writers develop better female characters in storytelling. He interviewed 50 actresses and women in the film industry to weigh in, and I had the pleasure of being one of these “Fab 50” women.

Creating Better Female Characters Part 1 – What do actresses look for?

Some highlights from my input:

FOCUS ON THE PHYSICAL

This was by far the most common grievance. Almost all of the Fab 50 commented in some form or other on how female characters are described. As actor-producer Isabella Tugman deplores: ❝It’s embarrassing how many female roles are based entirely on physical description without even a thought to who she is as a person.❞
Isabella nails it again: ❝Giving little character description aside from physical attributes is lazy writing and leaves a shallow, undeveloped character.❞
❝Women experience the full spectrum of emotions and elements of human suffering, just as men do. Women are human and make mistakes, they aren’t always pure and virtuous, nor are they 100% evil villain either.❞ says Isabella Tugman.
These are words writers need to have in the forefront of their minds when they write women in order to get women right. It’s about creating characters with more range, more subtlety. Isabella sounds the call:❝I want writers to tune into these nuances within female characters.❞
In Part III:

I’d like to give the final word to actress, singer and producer Isabella Tugman who covers many of the points raised in this article:

❝Men get more roles, more dialogue, more character variances, and more diverse representation. In the real world, women have just as varied a spectrum of characteristics and experiences as men, yet female portrayal in film has been far more limited. I find it insightful to think of a distinctive male role, like that of the brilliant autistic man portrayed by Dustin Hoffman in “Rain Man”, and attempt to recall a similar female role in a film, if there’s ever been one.

Isabella “Izzy” Tugman is a professional Voice-Over Artist, Actor, Singer, and Film Producer based out of Phoenix, AZ. She has also lived and worked in the Los Angeles, New York City, Austin, and Kansas City markets. Izzy has a Bachelors Degree in Music from Thomas Edison State University. In addition, she is a graduate of a rigorous two-year college performing arts program from the American Musical and Dramatic Academy (AMDA) in Los Angeles. She also spent two years as a Vocal Performance major at the University of Missouri-Kansas City (UMKC), where she studied to be an opera singer. Having spent a lifetime acting and singing on the stage, in front of the camera, and behind the microphone, a career in voice-over harmoniously blends her talents for voice, acting, story-telling, and language. Isabella is an incredibly hard-working individual who is committed to quality. She works consistently to improve on her talents and her business while maintaining a strong sense of integrity and a positive attitude. When she’s not pursuing her career goals, Izzy loves to sing, dance, read, practice yoga, play video games, travel, and indulge in spicy foods. An animal lover, she has two cats and two small dogs that might as well be cats. When looking for a Voice-Over Professional, Izzy is the Voice of Choice!

Izzy is a full-time Voice Actor in Phoenix, Arizona. With her extensive training and ability to take direction well, she can adapt her voice to suit many styles of voice-over.

Production and office hours vary. Izzy will do her best to accommodate projects at any time they are needed. Please reach out for a prompt response.